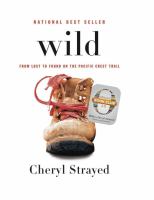 [from Lost to Found on the Pacific Crest Trail]

This book has been carried in backpacks, on kayaks and planes. It inspired and influenced all our local travel writers. What will it inspire in you?

Sometimes you need to just go off by yourself for a bit to find out who you really are.

I really enjoyed this book. Strayed offered totally honest and often times unflattering introspection about her life and decisions that led up to the point of deciding to hike the trail. Her descriptions of her time on the trail, the trials and triumphs that it brought, and the characters she met... Read More »

This is a true story of a young woman, devasted by the loss of her mother, who saves herself from self destruction by hiking the Pacific Crest Trail one summer. Although her horrible behavior is off putting at first, by the middle of the book you join her on the trail and at the end you feel a se... Read More »

Not exactly The Glass Castle, but not quite Eat, Pray, Love either. Strayed sets off to heal herself along the Pacific Crest Trail. And I think she does.

Really enjoyed this book. I would recommend it.

I loved this book! It made me really proud to be a woman! I found Cheryl to be a brave, young girl trying to find herself after her mother died and after a divorce. It was her journey alone through a trail from California to Oregon. However she did it, SHE DID! I really was thinking it was impossible. I was so proud of her when she did. The journey brought me with her and I really felt for her. It was an easy read and I just couldn't put it down! This book made me think about the struggles that a women in her 20's go through-how many women don't find that and get caught in the dogma of going to college, trying to find a job, land a career, etc. This novel makes you think about what YOU want to strive for and how you want to conquer something that can make a difference for YOU.

Cheryl Strayed was a brave young woman to have undertaken this journey. Her persistence to complete what she started is to be admired due to many mishaps along the way. She is transformed in so many ways by the time she reaches the end of the Pacific Crest Trail.

Everyone has a different view of a book - I was very disappointed in Wild. It had vulgar language and sex. This is definitely not a book for teens. The best I can say about it was the hiking parts were ok, but the rest of it was not.

Absolutely and highly recommend this book. It takes you through the journey of hiking the PCT and the struggles that come along with it. This is also a great book for anyone who is grieving a loved one. The writing and way the stories were told gutted me. (as in the authors words.)

One of the rare cases where the film is way better than the book. I found the author's self-absorption bordering on the pathological and didn't enjoy the writing.

Long-winded and self-righteous... a reminder of generations of people not of color crusading into other cultural appropriations...

Finally read this book after learning of it in college. What a great read.
Cheryl really manages to pull you into her story, letting you feel the emotions and the encounters that she faced during her trek on the PCT, but still leaves you wanting for adventure.
This book is going to be a good read for anyone who has an adventurers heart or who is looking a novel about self discovery.

". . . no one laughed. No one would. The universe, I'd learned, was never, ever kidding. It would take whatever it wanted and it would never ever give it back."

Perhaps by now I'd come far enough that I had the guts to be afraid.

"My boot was gone. Actually gone. I clutched its mate to my chest like a baby, though of course it was futile. What is one boot without the other boot? It is nothing. It is useless, an orphan forevermore, and I could take no mercy on it... I lifted it high and threw it with all my might and watched it fall into the lush trees and out of my life."

I walked until walking became unbearable, until I believed I couldn't walk even one more step. And then I ran.

Uncertain as I was as I pushed forward, I felt right in my pushing, as if the effort itself meant something. That perhaps being amidst the undesecrated beauty of the wilderness meant I too could be undesecrated, regardless of what I’d lost or what had been taken from me, regardless of the regrettable things I’d done to others or myself or the regrettable things that had been done to me. Of all the things I’d been skeptical about, I didn’t feel skeptical about this: the wilderness had a clarity that included me.

I don't know how living outdoors and sleeping on the ground in a tent each night and walking alone through the wilderness all day almost every day had come to feel like my normal life, but it had...and something inside of me released.

I felt fierce and humble and gathered up inside, like I was safe in this world.

runningbeat thinks this title is suitable for 16 years and over

This memoir by Cheryl Strayed tells of her decision to hike a large portion of the Pacific Crest Trail, alone, following the death of her mother. The book details the events surrounding her decision to hike the trail, and the resulting struggles and triumphs of her journey.