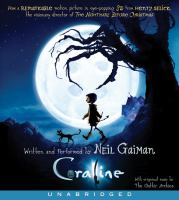 A young woman's curiousity leads her into a mysterious realm where things are not as they appear.

I LOVE this story! So creepy and fantastic and heroic. Great narration by the author.

Coraline is an interesting read. Though it is dark for a children's book, I believe that children can enjoy it because of the main character. Coraline is a girl who sets out to right the wrongs that she herself set in motion (though she didn't know what she was getting into at first). She is strong and uses her wits to help solve the problems that she encounters. Through her journey, she is able to piece together the past, and she courageously faces her foes to save not only her parents and herself, but those who have long been forgotten. Through her selfless actions, she proves that she is not only brave, but somebody to look up to, and a part of me wonders what became of her after her unforgettable adventure.

This book is certainly dark, and I would not recommend it for younger children, but I believe that it should be read by older children, teens, and even adults. Coraline reminds me of what it was like to be a child in the big, scary world, but it also brings to mind the resourcefulness that a lot of us grew out of. Whether you're a child yourself or looking back, Coraline is an engaging read that fascinates and captivates those who are brave enough to pick it up.

Coraline, like most young girls, gets tired of her parents nagging at her, people pronouncing her name incorrectly, & being ignored by others. And though many children wish they could have "the perfect parents" at some point in their lives, we know that most kids don't get the chance to find out what life would be like if they COULD have that. After moving in to a new flat, Coraline goes exploring to see what this new home has to offer. There is one door that is locked. Or course she decides she NEEDS to find out what's behind that door. It is an identical home to hers, in fact, it IS her home, but in an alternate world. She meets her "other mother" & "other father", both looking exactly like her ACTUAL parents. But these parents don't nag her, their cooking is delicious, & they'll allow her to get the fun clothes that she wants instead of the practical ones that she's had in the past. But are they really "the perfect parents?" Nope. Turns out the "other mother" will do ANYTHING to keep Coraline in this alternate world so that she has somebody to "love." Being the quick-minded, resourceful girl that she is, Coraline quickly discovers that she wants her REAL life much more than this alternate life. But it's not easy getting back home. And this evil lady has taken her REAL parents hostage. Coraline sets off on a mission to free her parents, 3 children she meets, & herself & return everybody back to the real world. Of course she is successful, but there is 1 more hurdle to jump in order to finally put this nightmare behind her. It seems that this ordeal will stick with her for the rest of her life.

This was a quick, easy read & thoroughly enjoyable. A fantastic alternate world, a mission to save the day, & a strong, young heroine that has a heart for others even more than herself --- what's not to love!? This is advertised as a childrens book, but I wouldn't let me 9 year old daughter read this just yet. Although they are presented in a rather light-hearted way, there are some darker, spookier elements throughout the book. Once it's deemed appropriate for any given person, I highly recommend this book.

Age recommendation: 12 & up (a bit spooky/scary for younger readers)

My daughter and I adored this story! Twisted, quirky and absolutely FUN!

Wonderfully creepy. I loved Coraline's brave little character. Listening to Gaiman narrate the story himself was the icing on the cake.

My first experience with Neil Gaiman's works. I thoroughly enjoyed it and plan to check out more of his stuff. Now I want to see the movie. :)

A very simple, easy-to-read story with a much bigger message. Perhaps something a parent will want to read and discuss with a younger child.

A very strange little book. I listened to the cd and the author, Neil Gaiman, was the reader. He does a good job, but the story is freaky and unsettling. Coraline enters an alternate world where she finds another family. Not a favourite of mine, but if you enjoy Roald Dahl, you would enjoy this book.

“I don't want whatever I want. Nobody does. Not really. What kind of fun would it be if I just got everything I ever wanted just like that, and it didn't mean anything? What then?”

jandt_mcmurray thinks this title is suitable for 12 years and over

sairen42 thinks this title is suitable for 12 years and under

corline moves into the pink palace.
has strange neighbors.
finds strange door.
later it leads her to her other family.
they want her to stay with them.
her parents disappear.
she challenges the other mother. coralin fights and wins.
she sets the kids and her parents free.
they live happily ever after

Frightening or Intense Scenes: a bit spooky for younger readers